Stockholm – Beauty on Water, so they say. In winter, it is partially on ice.

In this post, I talk about the highlights of our recent trip to Stockholm and share with you what it is like to travel there during winter.

I make a very detailed itinerary whenever we travel and we try our best to stick to it. I plan ahead most of our activities just in case we would have to book them early and also to gain insight on into how much we would have to spend while we’re away. So when we went to Stockholm last February for my wife’s birthday, we already had an idea on what we would be doing there, how to get to where we want to go, and approx. how much it would cost us. Here are some of our activities and bookings sorted by date and at the end of each are the prices.

We’ve booked our flights as early as November. We took a low-fare flight with Norwegian from Berlin SXF and arrived in Stockholm-Arlanda airport before midnight. From there, we took the airport shuttle going to the city. I found this very convenient because there’s a bus leaving every 15 minutes and they had WIFI on board. The ride took about 40 minutes. The place we were to stay at, an Airbnb, was in Fredhäll – just a few minutes away from the Central Station by subway or “T-bana”.

The Airbnb we rented was a two-bedroom apartment owned by an artist, and we got the whole place to ourselves since she was on a holiday with her family at the time. This was our view from the balcony when we arrived:

So on this day we went to see The Royal Palace mostly because it seemed necessary . It was a short tour of the palace, The Royal Apartments, and The Royal Treasury. After that, we rode the SkyView, which is a spherical gondola that goes up and down the Ericsson Globe for a 360° view of the city. We booked our tickets online to avoid a queue but it being a Thursday afternoon in winter, we were among only a handful of tourists. 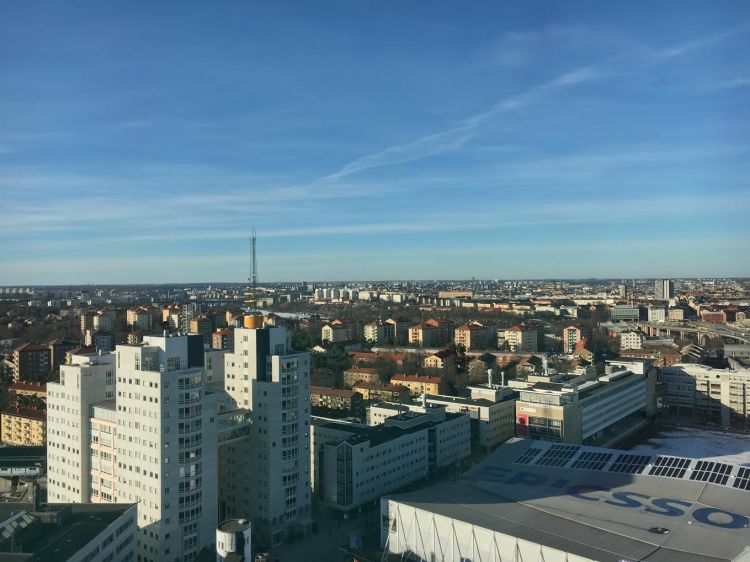 The view from the top of the Globe wasn’t too impressive since there aren’t a lot of recognisable landmarks on the city’s skyline from where we stood but it was such a beautiful day and that helped a lot in making it a pleasurable 30 minute ride.

On this day, we met up with a friend who has been living in Stockholm for about a year now. She took us to a place called Skansen, which is an open-air museum that exhibits rural culture of Sweden. It is located on a hilltop and it’s also home to some local animals of Sweden like lynxes, wolverines, seals, elks, and more. Again, this place was nearly empty given the season but one can easily see it turning into a beautiful green area on the warmer days. It was her treat to us but entrance fee during winter is 100 SEK or ca. 10 € per person.

One shouldn’t miss this activity when visiting Stockholm. Given the city’s topography, one of the best ways to see more of the place is by boat. So for this day’s activity, we chose to book the Brunch Cruise offered by Strömma. It’s a three-hour cruise going to Vaxholm and back to Östermalm and is only available on weekends. Early booking is recommended. The weather on this day was gorgeous! It was sunny and the sky was clear. The highlight of this cruise, though, was the brunch buffet that served a variety of Swedish specialties like smoked salmon and, of course, Köttbullar (meatballs). The price is 465 SEK or ca. 47 € per person which includes a table for your party, all you can eat brunch from the buffet and the three-hour cruise itself. The price is quite shocking at first sight but, if you think about it, dining out in Stockholm is rather expensive and considering this was our breakfast, lunch, and half of our dinner, I’d say it’s a fair price.

Too bad we did not have more time to walk around Stockholm but we’ll be back, for sure.

As I’ve already mentioned in a previous post, one reason why we book an Airbnb rather than a hotel room is so we don’t have to spend too much on food. Sure, we splurge a little for a local dining experience but we had most of our meals at “home”. We always make sure to hit the grocery stores at the beginning of our stay (which, by the way, can also be quite an experience if you are in any way interested in knowing what the local people are eating on an ordinary day).

Maybe on our next adventures I will try to give a more detailed recollection of our trip with more ways on how to save or, rather, not spend so much and weigh some more practical options. But that’s it for the mean time!

4 thoughts on “Stockholm in Winter”