I know… Shocking, right? I just scrolled back through my last five posts and all of them are travel-related. Well, I really don’t want to give out the impression that all that I do (or at least all that is worth mentioning) is travel. It’s really not. And even if I had the money to do just that, I don’t think I would because that will just remove the excitement from it all. Don’t you think?

I was at my sister’s 30th birthday party the other weekend and witnessed a packed pub filled with her guests, all of them are people close to her. I didn’t even know most of them, some I’ve never even heard about. I realised that by the time I turn 30, it will be unlikely that I throw a party like that. By that time, I will have been about just as long here in Germany as she is now but I’m just sure I will not even know that many people let alone be close with them. Now, don’t get me wrong, I’m happy for her and for her eventful social life and I have long accepted the fact that I am not the outgoing and friendly one in the family – probably also because growing up, I did not have much of my own friends until the time I got to school and I usually just tagged along whenever my sister wanted to go out with her friends because she wasn’t allowed to go unless she brought me with her. Sometimes I still find it easier to befriend her friends than making my own. Trust issues? Probably.

Now, getting to my point: I am at a time in my life where I am actually truly happy. My marriage is doing well, I have a job that I love, I get to spend time with the few good friends that I have here, and I live in this vibrant city with a lot of opportunities to be a more open and better person. So I guess, for my own standards, my life is pretty exciting as well.

You see, traveling is not the only exciting thing in my life, but rest assured it’s the one thing that inspires me the most to do everything else. In fact, I have just started an A1 language course in Spanish which I am really stoked about! Every Monday and Wednesday evening I go for a couple of hours to the community college downtown for fast-paced lessons in Español. It took little convincing for my employer to give a little more flexibility on my work hours on these particular days (because I work shifts) – I told them I intend to use this foreign language for work as well so I hope I learn fast.

So why Spanish? When I was 12 years old, I’ve found some of my father’s course manuals which he had bought back when he took a language course himself. He’s never finished the course but he was happy when I told him I wanted to pursue it. I had been to Spain myself, and the goal is to go there or to any Spanish speaking country at least once a year. This is something I had kept up since 2015 and this year in December we’re going to Tenerife. It will also be my first time flying with the airline that I work for, finally!

Just the day before my first Spanish class, we were on our way back to Berlin from Bonn and I asked the wife to make a stopover in Kassel for documenta14, an exhibit I had been wanting to go to for months that was about to end. The most significant exhibit on this year’s event is the Parthenon of (Banned) Books, which is a replica of the Parthenon in Athens, covered in thousands of banned books from all over the world. 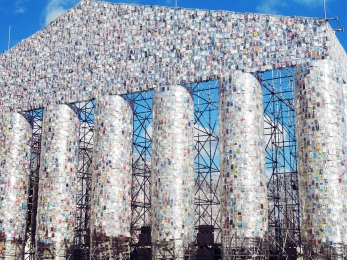 And because the exhibit was nearing its end, they started giving away the books on that very day and I picked up one of the many copies of El Príncipe. There were not many options because they only put out a limited amount and most of them were copies of the same book but it felt like a good omen to me because it’s in Spanish and, who knows, maybe about a year from now I will be able to read and fully understand it!